The United States military says it has killed 13 members of the al-Shabab extremist group with an airstrike 30 miles (48 kilometers) outside Somalia’s capital.This is the 10th U.S. airstrike this year in Somalia. It carried out nearly 50 strikes last year in the Horn of Africa nation against al-Shabab, the deadliest Islamic extremist group in Africa. 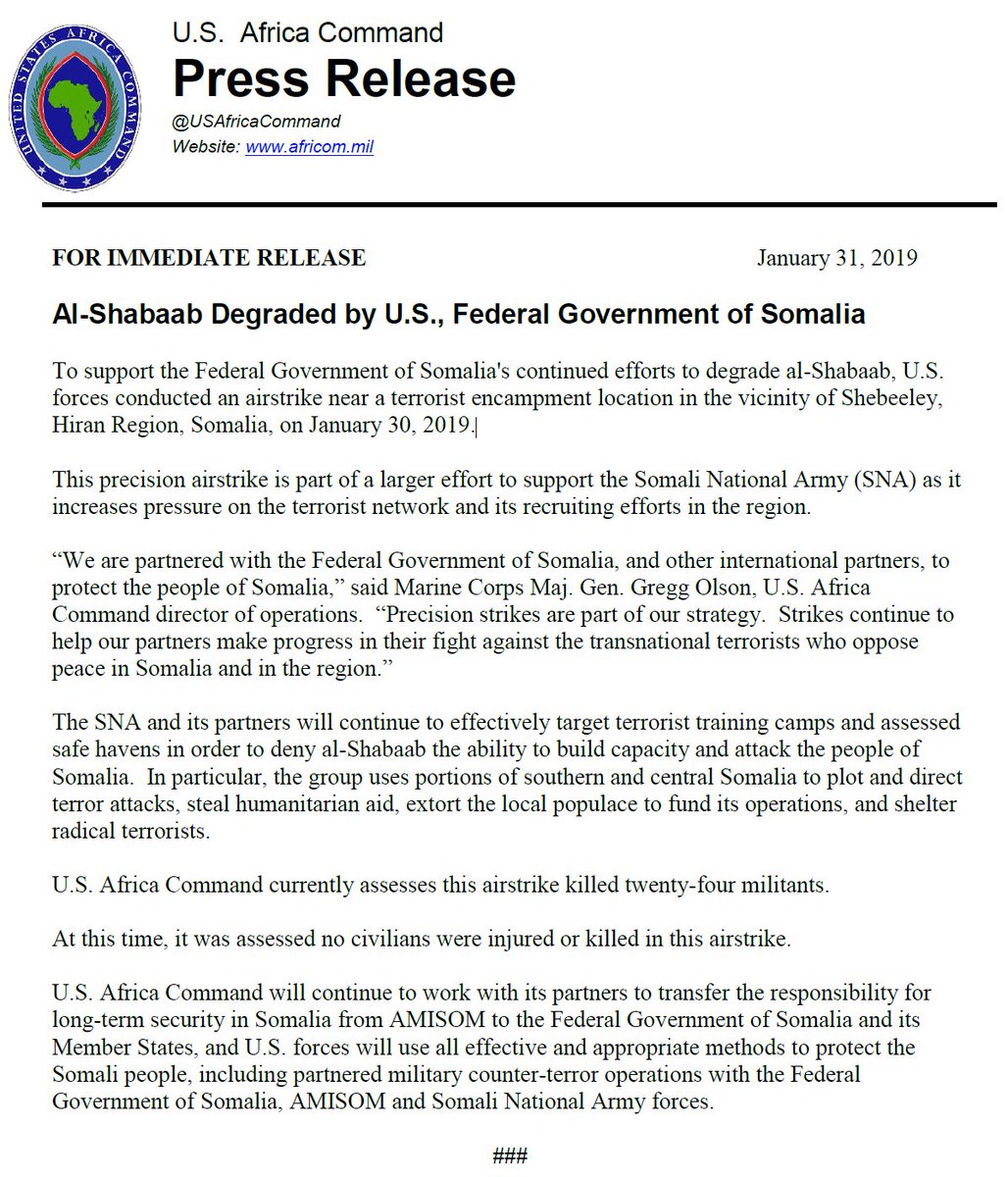 However heads of the US intelligence agencies have said the Al-Shabaab terror group is likely to continue posing threats to the nations of East Africa in the coming year.

Violence on the part of the Islamist insurgents is unlikely to be reduced due to “elite competition, corruption and poor coordination among security services in Somalia,” the spy masters stated in a report released on January 29.

Shabaab’s ability to carry out attacks will also not be significantly blunted by the forces of the African Union Mission in Somalia (Amisom), the report suggests.

The 21,000-strong Amisom detachment, which includes about 4,000 Kenyan troops, “is unlikely to engage in aggressive offensive operations against Al-Shabaab in advance of the mission’s scheduled withdrawal from Somalia by 2021,” the intelligence chiefs said.

The report offers no analysis of the effects of intensified US air attacks on Shabaab targets. The US military claims to have killed hundreds of Islamist militants in Somalia during the past two years.

The analysis of security conditions in East Africa is presented as part of the latest annual “Worldwide Threat Assessment of the US Intelligence Community.”

Africa receives only one page of generalised attention in the 42-page report that gauges challenges facing the US and its allies.

Most of the assessment concerns perceived threats to US security from North Korea, Russia, Islamic State militants and other entities with the capacity to do significant harm to US interests.

Internal peace is unlikely to be achieved in South Sudan in the coming months, the report states.

The peace agreement signed between government and opposition groups in September 2017 “faces delays and implementation difficulties,” the assessment finds.

“Acute food insecurity and constraints on aid access — resulting from poor infrastructure, seasonal rains, active hostilities, and government- and opposition-imposed impediments — are likely to contribute to an ongoing humanitarian crisis” in South Sudan.

Armed conflicts will also persist in Central and West Africa, the report predicts.

’ll honour Ahmed Suale with a ‘huge story’ that will shake...